“Doesn’t Want Him Spilling The Dirty Secrets”–Trump Exposes Why Biden Is Defending Milley
Pro Trump News receives compensation from affiliate partners for links on the site. Here's our complete list of Affiliate sites.

After reports of General Milley undermining Trump while Trump was President surfaced Joe Biden defended Milley saying he has “great confidence” in him.

MOMENTS AGO: Pres. Biden says "I have great confidence in General Milley." pic.twitter.com/eh1GgS3vOB

Trump released a statement unloading on General Milley and saying that he was not told about any calls being made to China.

Trump also exposed why Biden is still protecting him.

Here is the statement: 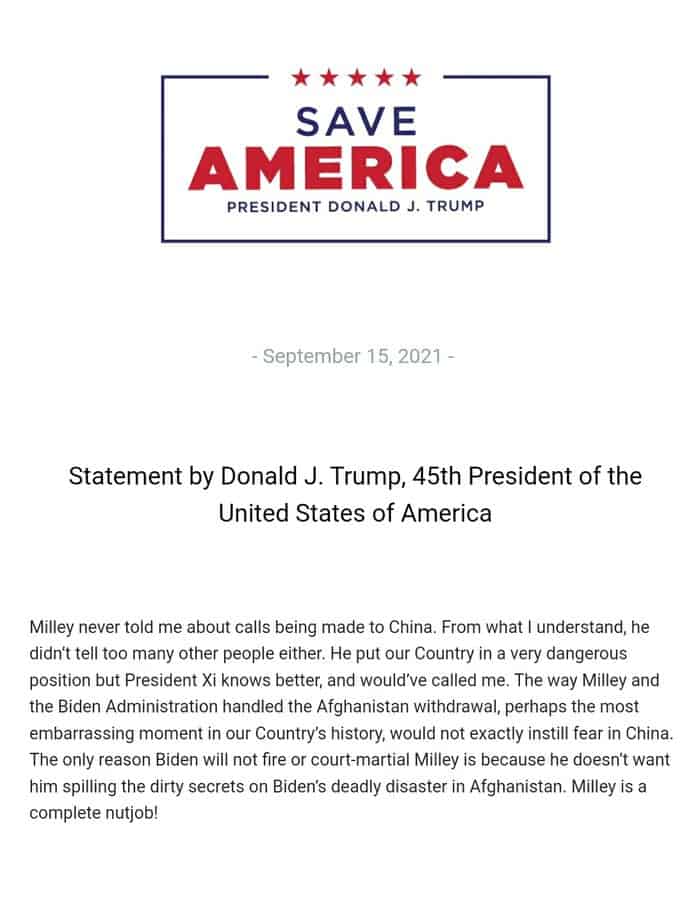 Milley never told me about calls being made to China. From what I understand, he didn’t tell too many other people either. He put our Country in a very dangerous position but President Xi knows better, and would’ve called me. The way Milley and the Biden Administration handled the Afghanistan withdrawal, perhaps the most embarrassing moment in our Country’s history, would not exactly instill fear in China. The only reason Biden will not fire or court-martial Milley is because he doesn’t want him spilling the dirty secrets on Biden’s deadly disaster in Afghanistan. Milley is a complete nutjob!

In a prior statement, Trump said that if the relations about Milley are true, it is treason.

“If the story of “Dumbass” General Mark Milley…is true, then I assume he would be tried for TREASON in that he would have been dealing with his Chinese counterpart behind the President’s back and telling China that he would be giving them notification “of an attack.”

The good news is that the story is Fake News concocted by a weak and ineffective General together with two authors who I refused to give an interview to because they write fiction, not fact. Actions should be taken immediately against Milley

and better generals in our Military, of which we have many, should get involved so that another Afghanistan disaster never happens again. Remember, I was the one who took out 100% of the ISIS Caliphate. Milley said it couldn’t be done!

attacking China—and China knows that. The people that fabricated the story are sick and demented, and the people who print it are just as bad. In fact, I’m the only President in decades who didn’t get the U.S. into a war—a well known fact that is seldom reported.